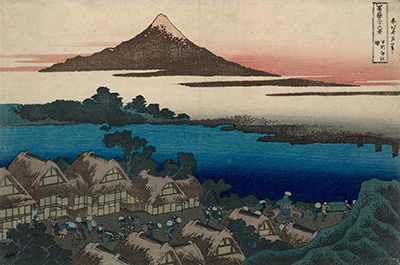 Dawn at Isawa in Kai Province or Kōshū Isawa no akatsuki, is one of the famous prints from Katsushika Hokusai’s series Thirty-six Views of Mount Fuji also known as Fugaku sanjūrokkei. The artist, Hokusai, was born in 1670 in Japan, Edo District during the Edo period.

The print Dawn at Isawa in Kai Province was printed in ca. 1830-1832 and classified as a print on a Polychrome woodblock print; ink and color on paper medium with the dimensions of 9 7/8 x 14 5/8 in. (25.1 x 37.1 cm). Today, Isawa is known to be a sightseeing spot during the hot spring days. Originally during the Edo period is was as postal station along the Koshu Highway. Hokusai depicts the sun rising on the horizon flushing the sky with a soft reddish sky as travellers depart for a long tiring journey.

The travellers are passing through dark streets past houses with thatched roofs but shut to the early morning sky. The entourage winds its way to the bridge that ends up delivering them across River Fuji. The lower side of Mount Fuji has forests and a bridge that are dark in colour. This Ukiyo-e print represents the start of normal day. Although he was originally born Tokitaro, Hokusai had thirty pseudonyms throughout his career.

He learned some of his painting skills from his father, a mirror-maker Nakajima Ise who used to paint some of his mirrors’ frames. Hokusai was very strict with the publications of his works that at one point it’s documented that he wrote two letters to his publisher and blockcutter of the Toshien Ehon production to register his disgust over the alterations that had been done by his former blockcutter Egawa Tomekichi on his Ukiyo-e style. Hokusai was respected among his peers during the entire Edo period of between 1615 and 1868 because of his unique style and an ability to portray the relationship between humans and the environment, especially in his Thirty-six Views of the Mount Fuji prints.