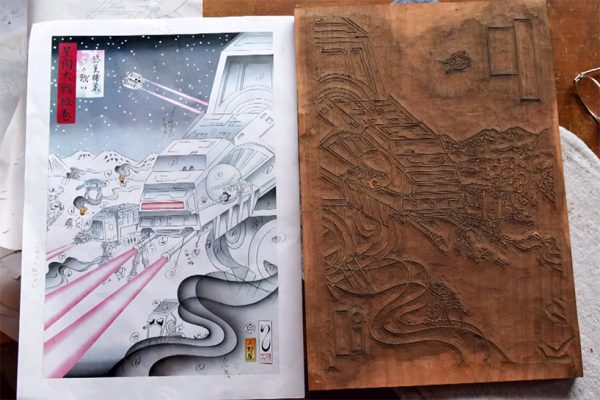 Ukiyo-e was a period in Japanese art history which brought about a number of different genres and varied over time as new exponents joined. One of the highlights in its oeuvre would be the proliferation of woodblock prints.

Japan had a very traditional culture throughout the 17th to 19th century and this would sometimes impact the content that was permitted for artists to work with. At times they would resort to the safety of nature when other topics became taboo with the ruling powers, before then returning to them later on when tastes changed once more. This means that a good variety of different artwork can be found here, with landscapes and seascapes joined by depictions of flowers and plants plus images of people going about their daily lives. There were also a number of female portraits, in different styles dependant on the artist involved. Hokusai is highly regarded within Japanese art but his career actually arrived very much in the latter stages of this overall movement, and so one should not take too much just from his career regarding the overall approach of Ukiyo-e, and try to study a wider breadth of this period’s output.

One of the biggest impacts of this new period was the inclusion of normal people within art, which had not really been seen before within Japanese art. One can compare this to Europe, where a similar situation existed before the likes of Pieter Bruegel would start to capture the lives of common people in a variety of everyday situations. This then encouraged others to do the same and we slowly arrived at the more open minded styles of the present day. Maple Viewing at Takao by Kanō Hideyori arrived just prior to Ukiyo-e commencing and that beautiful piece raised the idea of what could be achieved by focusing on normal people within landscape paintings. The emergence of the ukiyo-e in the late 17th to early 18th century would then take those ideas and develop them further. Painting was the main medium during the earlier periods before other techniques started to appear, one of which were the colour prints produced from woodblocks using methods that are still used today.

Multiple woodblocks would be used together in order to add new colour schemes to Japanese prints for the first time. Each block would be devoted to a different colour and this made the production of coloured prints much easier than from the techniques that had been used before. Previously it was necessary to hand paint any coloured elements and this was simply not suitable for any commercial purposes. Suddenly, artists felt an opportunity to spread their work further and wider in a similar way to the methods used by European artists with etchings, where cheaper prints could allow a much wider audience to enjoy their work. Several different methods of using colour came about during the 18th century, with the most successful being termed benizuri-e. Those studying the 1740s in Japanese art, when benizuri-e was first used, will notice how just a small selection of colours was used at this time, partly due to sourcing issues and partly based on the conservative tastes of the audience.

There were also significant changes in Japanese society at this time, with much of the population starting to develop an interest in art for the purposes of adding interesting items to their home. Art was becoming affordable and also reflecting a more interesting variety of topics which was fuelled by the printing techniques now being used. Some artists would set up shops for the first time from where they would promote their own creations. This new success would also encourage experimentation with the printing process, with creative artists never being able to settle on the norm. This would lead to graphics being used within literature for the first time, which is something that has become something of a hallmark within multiple Asian cultures. The production of printed paintings also offered the opportunity for the exporting of Japanese art for the first time, and this helped to promote the qualities of this culture abroad, with Europeans becoming particularly interested in these new developments.

The colour prints of the late 18th century would be termed nishiki-e and at this point the entire Ukiyo-e period was at its creative and commercial peak. It was not only standard paintings and designs that would be printed, but also more sellable items would be designed purely for the purposes of profit. There was a widening of wealth due to changes in the national economy with trade bringing opportunities to previously impoverished parts of the country. Calendars would be one example of this, where illustrators would design products that they knew would be suitable for the masses and could therefore be sold in large quantities, which would have the additional benefit of promoting their own reputation across the country. Publishers would consider their market before choosing the appropriate method of production, where more expensive methods would be aimed at a wealthier audience. Art has always reflected society, and not just in the content or style of it, but also in the techniques used for commercial production, from the perspective of judging what will sell effectively. The video above gives an idea of the techniques involved.

Advancements would then be made to allow a more complex palette of colours, with up to twelve different tones now being possible within the same design. The use of potentially a dozen different blocks to produce a single artwork was clearly extreme, compared to what had gone before, but it was clear by now that artists would continue to push the boundaries of self-expression and commercialisation by tweaking the production methods. Suzuki Harunobu was one of those responsible for this and he also started to work with half tones in order to create more subtle balances within his paintings. Unfortunately the public would appreciate these new styles so much that the more traditional benizuri-e and urushi-e would suddenly fall from favour and be very much forgotten for a number of decades until being re-discovered in the following centuries. One can make comparisons to European art, where new movements would introduce much brighter colours schemes which the public adored and then started to turn their backs on what had gone before.

There was still some time left in the period of Ukiyo-e for further changes to occur. Having established these new methods by which a much wider palette of colours could be used, the younger generation of artists would set about applying these techniques to a different array of content. There was a focus on realism rather than idealising individuals and also an acknowledgement of a growing celebrity culture within Japan. Women would appear more frequently and their roles within these paintings would change. There was a nod to the courtesans and geisha who had previously been kept away from exposure due to the serious nature of Japanese culture. There would also start to be an influence from European artists for the first time, some two centuries after the groundbreaking work of the Italian Renaissance artists and further contributions from many in the north of the continent, such as Bosch and Van Eyck. The world was starting to become smaller and more connected, with art reflecting this in a visual capacity.