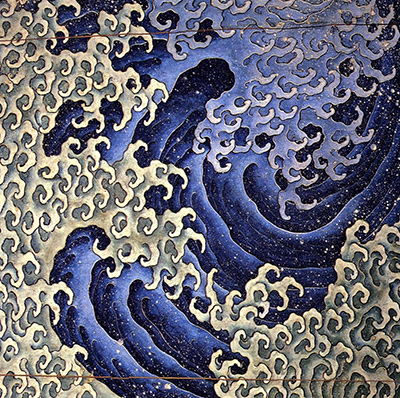 Prolific and quintessentially Japanese, the work of Katsushika Hokusai has defined how the West views the art of Japan. Masculine Wave looks at the movement of water differently and more specifically from the iconic ‘Great Wave off Kanagawa,’ giving an intimate picture of the wave as well as a sense of the artist.

Hokusai was born in Edo (modern day Tokyo) in around 1760 and began working professionally as an artist in 1779. Initially Hokusai was part of the Ukiyo-e art movement in Japan, which produced depictions of the hedonistic lifestyle of the mercantile classes at that time. Geishas, Courtesans and court scenes were all brought to life as part of this art and Hokusia, under the tutelage of Katsukawa Shunshō, embraced this. Shunshō’s death in 1793 allowed him to change direction and explore his interest in natural landscapes and daily life in Japan across different social levels. This in turn reflected his Shinto way of life.

Shintos see life as full of spiritual essence, to be found throughout the natural world. Hokusia embraced the natural and the everyday – he produced works depicting all levels of his society and shared his understanding of life as a spiritual experience through them.

Masculine Wave retains the style of Great Wave Off Kangawa with the ebb and flow and of the waves appearing like tendrils reaching from the water. This is a close up of the waves though, full of energy and dominating the deeper waters behind them. The exact date for its production is unknown, although some estimate it be around 1835. It forms a pair with Feminine Wave and the two complement each other. They are subtly different, with the energy and fight of Masculine Wave transformed into something more peaceful and more accommodating in Feminine Wave.

This shows two things. First it is a representation of the traditional gender roles and characteristics that Hokusai’s society believed in. Here the man is vigorous and adventurous, challenging its path whilst femininity is calm and submissive, accepting of the path it is given. As such the two waves embody the spiritual essence of masculinity and femininity.