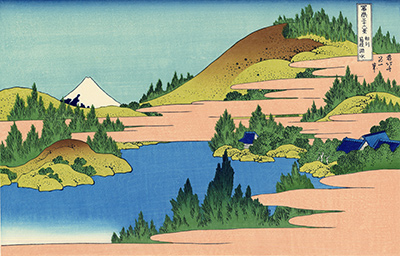 Mount Fuji is very famous not only because it is so beautiful but also because of the thirty-six views of Mount Fuji created by Hokusai. It is considered very important to their religion and culture this shown in his arts. In this series, he depicted different views of mount Fuji.

At this time he was in his seventies. Born in 1760 Katsushika Hokusai was an iconic artist. It is said that Mount Fuji secretly was a source of immortality and Hokusai seemed to know that. He was so into his art that two of his marriages failed. He spent all his life painting after he found his passion for art. The total of his work is approximated to be 30000 pieces of art. On his death bed, it is said that he wished he had a few more years to paint. His most famous painting is the great wave off Kanagawa.

In this art, you can see the in the background Mount Fuji and he shows at the front a huge wave coming at three boats. Hokusai’s images are very uniquely painted. Drawn first on paper then carving it on a woodblock. Because he was raised by a mirror maker and painter he had the skills and would now paint the wood and transfer onto a paper. He also used some colours on his work. The Lake of Hakone in Sagami Province is on of the thirty-six views of Mount Fuji. This specific image has bright tones. He uses traditional Japanese prints with some western influence.

He learnt a lot from his teacher Katsukawa Shunsho who later died. After the teacher died Hokusai was left wondering what to do he tried different styles till he found his style. He was so good at landscaping. Hokusai did not stay in one place he kept on moving from places mostly because he didn’t like to clean. Hokusai changed his artistic names so many times but it is in 1797 when he started using Hokusai.