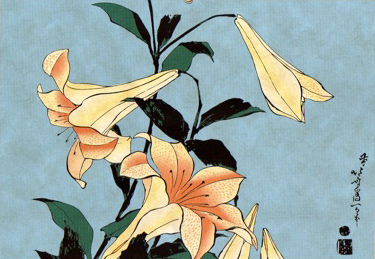 Created in around 1830, Lily is a gorgeous and sumptuous looking work of art by the Japanese Ukiyo-e artist Hokusai. This richly coloured and delicately imagined painting in ink depicts a fresh lily in vivid detail, sent against an attractive background.

Though he is perhaps best known for his work The Great Wave (circa 1832), Hokusai painted many other natural forms. Lily is one of these, and it is a fantastic motivation to look beyond Hokusai’s most iconic work and to explore the rest of his opus. As mentioned above, Hokusai was a painter in the Ukiyo-e genre. More than this: he is one of the key artists who shaped this genre and made it into one of the most renowned painting styles. Dreamlike and incorporating a wealth of detail, Ukiyo-e is created using ink and a woodblock that has been carved by hand in intricate designs.

Traditionally, this genre of painting focused on the plush, urban lives of geisha and socialites in what is now Tokyo (at the time, the city was known as Edo). The world inhabited by this social group was known at the time as ‘the floating world’. Nevertheless, as is evident form Hokusai’s works, Ukiyo-e was not limited by this subject matter, and artists could branch out into depictions of natural forms (as with Lily) and manual labour (such as Hokusai’s depictions of fishermen in his work Night Fishing).

The rich colours that make up Lily (and Hokusai’s other works, too) are part of a traditional Japanese palette of colours known as dentouiro. Red, black, white and blue are recognised as the ‘oldest’ colours in Japanese art, though art historians have suggested that it is more appropriate to think of them less as colours and more as variations on light and shade. Hokusai is an artist who loved to play with light and dark, and with the contrasts between day and night. Many of the dyes used in traditional Japanese art are named after natural lifeforms, cementing the relationship between art and the natural world that is so evident in works such as Lily. One example is the colour azukiiro, which quite literally means ‘the colour of adzuki beans’.